Are you looking for answers to life's questions? Do you want to know what the Bible says about a certain subject or issue?

Here are some resources that will help in your life journey.

Sabbath school classes are the heartbeat of our church community. Each week we spend time learning from Scripture and from each other. Find the right class for you from the options listed below:

Our Sabbath school fellowship and Bible study begins at 9:30 a.m.

Next week and the current

'Why is knowing Christ personally so essential to our being able to witness about Him?'

'Why witness? When we understand who He is and have experienced the marvels of His grace and the power of His love, we cannot be silent.'

When to Leave the Cities

This sermon deals with the topic of when it would be wise for Christians to leave the cities. Country living is the ideal place to live. Yet God calls us to reach the cities as well. The Lord does not want us to be hermits away from people. Neither do we need to live in the inner city environments. But there will come a time at the end in which we should flee the cities.

Is My Christianity Real? Pt. 1

Do you know if your Christianity is authentic? We get preoccupied with the actions and forget about our attitude. Part 1 of 2

What will Heaven be like? God is preparing a glorious kingdom for us.

Light in the Darkness 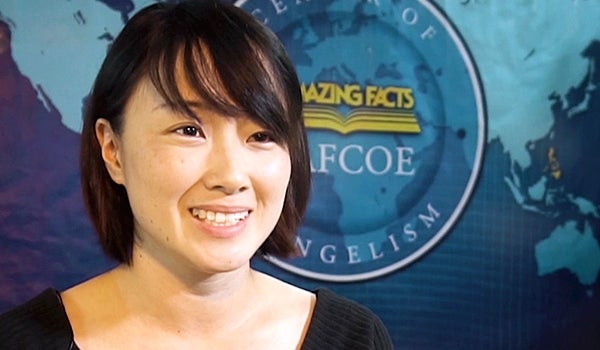 Kie was raised as a Buddhist and was taught to pray to her ancestors and depend on her own strength—which eventually resulted in hopelessness and depression. But through faithful donors like you, God guided her to Amazing Facts resources that led to her baptism. Today, she is a powerful witness for Jesus Christ!

The Lion and the Cobra ENCORE

From current events to age-old concerns, from finances to metaphors and symbols, learn what the Bible has to say about abortion, eternal punishment of the wicked, tithe distribution and much more. Listen to Pastor Doug and Pastor Ross in this episode of Bible Answers Live as they examine the Scriptures and help listeners from all over the world come to a clearer understanding of God's holy Word.

Your Bible Reading Plan selections for today can be found below. If you don't have a Bible with you, just click the references to read each passage online:

Was this email forwarded to you?
Click here to get your own free subscription!

Average reading time is about 6 and a half minutes

An Amazing Fact: Probably the only healthy man in modern history who never saw the form or heard the voice of a woman was Mihailo Tolotos. Mihailo was a monk who died in 1938 at the age of 82 in one of the monasteries atop Mount Athos, in Greece. When his mother passed away during his birth, Mihailo was taken the next day to Athos, a piece of land jutting out into the Aegean Sea. The monk never once, throughout his entire life, left this monastic colony, which for more than 900 years has strictly excluded all females, animals as well as humans. This tradition dates back to the founding of the monastery nine centuries earlier.


Is it good for man to be alone? Not according to Genesis 2:18. But with the rising divorce epidemic it might make you wonder if marriage is still a good idea. Jesus quotes Genesis 2:24 and says, “For this reason a man shall leave his father and mother and be joined to his wife, and the two shall become one flesh” (Matthew 19:5), supporting the institution of marriage.

The apostle Paul certainly does not insist on everyone getting married, and supports celibacy as a positive lifestyle for serving the Lord (see 1 Corinthians 7:7). But would Paul recommend a lifetime of seclusion? In an interesting application of Genesis 2:24, the apostle says, “For we are members of His body, of His flesh and His bones. ‘For this reason a man shall leave his father and mother and be joined to his wife, and the two shall become one flesh.’ This is a great mystery, but I speak concerning Christ and the church” (Ephesians 5:30-32).

In the Bible, a woman is used as a symbol for God’s people. “I have likened the daughter of Zion to a lovely and delicate woman” (Jeremiah 6:2). God’s church is described as a woman in Revelation 12:1. Perhaps Paul’s counsel to Mihailo Tolotos would be to stay connected to God’s people and not live in isolation from the body of Christ. It is not good for anyone to be separated from the church, especially as we near the time of Jesus’ return.

“And let us consider one another in order to stir up love and good works, not forsaking the assembling of ourselves together … so much more as you see the Day approaching” (Hebrews 10:24, 25).

KEY BIBLE TEXTS
And the LORD God said, It is not good that the man should be alone; I will make him an help meet for him. Genesis 2:18For we are members of his body, of his flesh, and of his bones. For this cause shall a man leave his father and mother, and shall be joined unto his wife, and they two shall be one flesh. This is a great mystery: but I speak concerning Christ and the church. Ephesians 5:30-32

Was this email forwarded to you?
Click here to get your own free subscription!